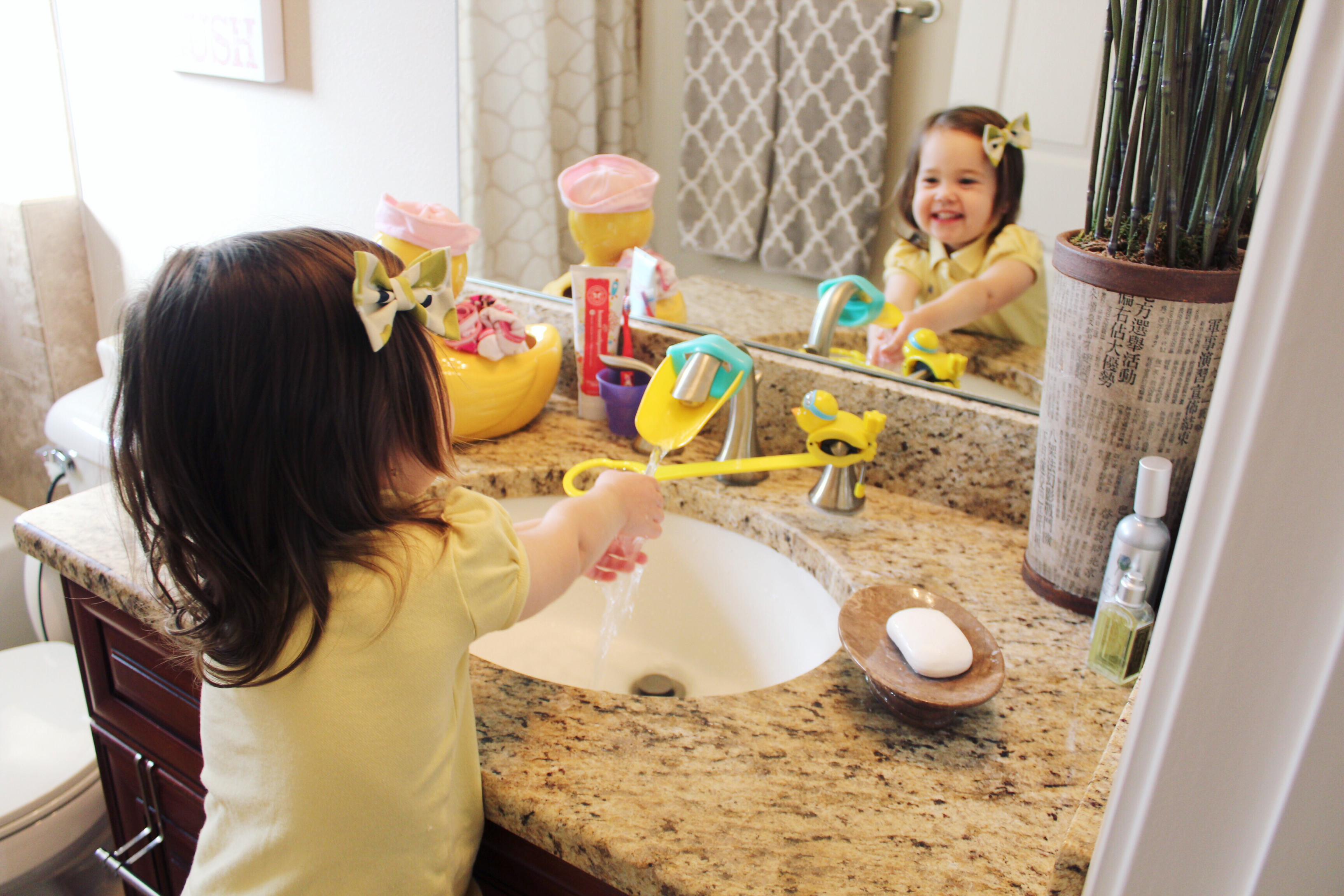 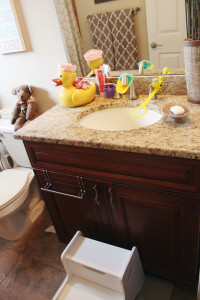 Okay, let me start by saying we are only on day THREE. Yes, three. And its the morning as I write this so it is more like two and half at this point. So I’m not trying to claim to be an expert or have a genius child but I think we’re getting in the groove over here and learning how to use the toilet. Joie has gone both pee and poop and we haven’t had an “potty accidents” since 1pm yesterday! I found a few things that have really helped me and I thought I would pass them along!

We are not in any rush over here and I have been very cognizant of my words as to not make my daughter fearful, or shamed to use the toilet but I also haven’t done much research on the topic either so I’m kind of winging it. Like my motherhood journey in general. If you can see any sort of trend going on, I tend to lean towards Maria Montessori’s methods of child development and learning. So I think that has been the leading force and main constant in our toilet training adventure we have embarked on!

*Consistency! This is so important! We decided to set a block of 3 days aside to start and we made sure we had zero plans during this time. We planned to bunker down and NO leaving the house. The morning we started we explained to her what we were doing, although she just turned two, we speak to her with respect and on her level. Its important to note that we have introduced the toilet to her in the months leading up to this, so it wasn’t a completely new concept for her. She had seen the toilet, sat on it etc. We have both a “kids toilet” and a seat attachment for the regular toilet. Both are available and we let her choose what is comfortable for her. So far she would rather use her own kid toilet and that is totally fine by us. That morning we put on her first pair of “big girl underwear” and covered the house with towels. Literally. Everywhere she played, I was behind her putting a towel down. She was hesitant at first to even wear the underwear so I decided to let her watch her favorite show (Daniel Tiger), which happens to have a “potty episode.” This helped her tremendously because if Daniel Tiger does it then she definitely wants to do it too! After that I just took her to bathroom every 30-45mins and explained if she had to pee/poop this is where to go. I really tried hard not to say “accident” when she wet herself. I just took her straight to the toilet and said “when you have to go, this is where we go” type thing. After a few times, when she realized what was going on I would say “we don’t pee on the floor, we pee on the toilet, lets hurry to the toilet.” I think as she gets older, and is fully potty trained and has a “potty accident” then I will address it as just that, a “potty accident” but right now she isn’t cognitively there yet in my opinion. Honestly, I have kind of used the “puppy training” mentality although that surely doesn’t make me sound like mom of the year! But I did say we were starting with the basics!

*Be on their level! This to me is the “Montessori” part of our toilet training/learning. Everything in the bathroom is accessible to her and on her level. We follow that trusty Daniel Tiger song chronologically. Potty > Flush > Wash > Be on your way! As you can see from this attached picture, Joie can do every part of this independently and without any assistance because of these little gadgets I stumbled across! By being at her reach, she finds pride in every process and is quick to say, “I can do it all by myself” with the biggest smirk on her face!! 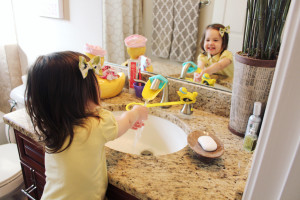 And thats a wrap! We haven’t done anything super fancy. We haven’t invented some quick new way, we just stuck to the basics and on day two and half, she has already been consistent and has showed great progress. And as I said, has still not had an accident since yesterday! 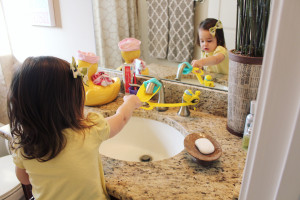 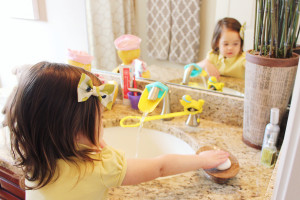 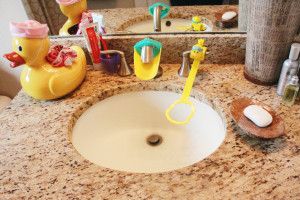 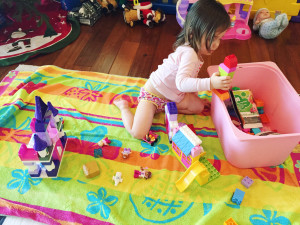 Good luck on your toilet training/learning experience. It’s messy but rewarding! I hope I could help you have even more success in your journey! 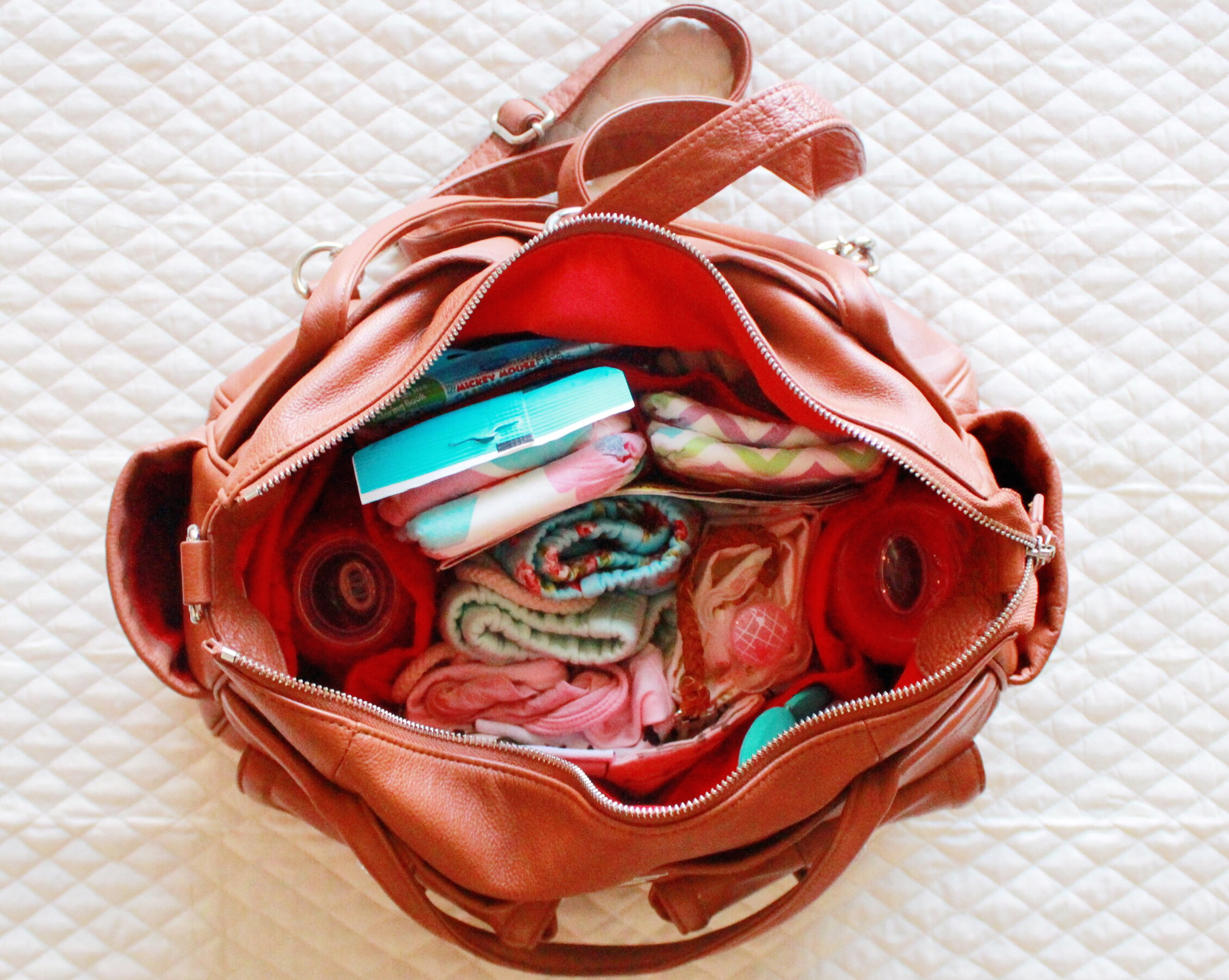 Lily Jade: How to pack for two little ones!

The SNOO For Two – The Smartest Bassinet You’ll Find

A Day In The Life With Our Twins + Sleep Schedule

Hello! Noelle here! I am the owner + creator of this blog. I am the wife to an amazing man and mother to 4 children under 6! Two incredible little girls who are 16 months apart and TWIN baby boys! They all keep me very busy to say the least but I have learned to embrace the chaos! In doing so I found a passion in sharing our life in hopes to inspire others to do the same. Here you will find everyday KIDspiration from kids play spaces to interior design, positive parenting tips, travel and much more. For more about this blog and me hit the “about me section” and keep reading! Welcome and I hope you enjoy what you see!