I can’t even believe that it was over 9 months ago that I sat in that ultrasound room with Lola sitting on the chair next to me (eating goldfish at 10 o’clock in the morning just to keep her occupied) while I prepared to get my dating ultrasound for our third baby. My husband wasn’t there due to some work obligations but I was anxious to get our first ultrasound and show him the picture of our little peanut to be. The moment I heard twins my whole world changed. I am pretty sure there was some explicit words said all while Lo sat there clueless. I left in shock and wanted so badly to call Jason up and tell him the news but instead I waited. I waited until he got home that evening and surprised him with the biggest news of all – TWINS. I’d be lying if I said we both weren’t a little scared but we were also SO excited for these two blessings. That is where this twin journey of ours started.

Fast forward to about halfway through my pregnancy when my OB finally started talking about birth options. I expressed to him how I really wanted to have them vaginally but also wanted them to come out safely. So he gave me ALL the stats (I wont bore you with those) but he basically told me that if they’re both head down then a vaginal birth should be no problem. He mentioned the chance of Baby B flipping breech once Baby A came out and the possibility of Baby B having to come out via C-section. If Baby A were breech when I went into labor then I would need a C-section without question. I spent months anticipating what would be but at every ultrasound they both remained head down. I read stories of babies flipping even in the 30th weeks and I just tried staying positive. I just kept my eye on that vaginal delivery and kept peace with the idea of a C-section. Worrying wasn’t going to get me anywhere and I really think that mentality helped me overall!

38 weeks came quick (yet in some moments I thought it’d never come). I honestly NEVER thought I’d still be pregnant at 38 weeks but there I was! My OB had my induction planned for that Friday evening and it was something my husband and I were both so foreign to. We made our arrangements for the girls and said our goodbyes. I have to say leaving them was gut wrenching. We had never left the girls overnight for more than one night but I also knew the next time we walked through our doors their whole world would be flipped upside down. I was happy to be welcoming our boys and to give them the gift of siblings but I still knew the adjusting period for the girls was just beginning. Driving to the hospital knowing we were going to be having the babies that weekend was another odd feeling. There was nothing spontaneous about it (like with my previous labor/delivery stories) but yet we didn’t really know what to expect.

Once we got signed in they brought us to our room and started hooking me up to monitor the babies. Within the hour my body started labor on its own, before any medications were ever started. We were all pretty surprised to see the contractions pick up and get closer together right before our eyes (well on the monitor). My doctor decided to let me start laboring on my own overnight (instead of starting the cervidil as planned). They all told us to get some rest but that was of course easier said than done. The next morning I hadn’t progressed much so we decided it was time for Pitocin and that we would skip the cervidil for now. Once the Pitocin started my contractions definitely started getting stronger. At about 4cm I received an epidural and we kind of all assumed it’d happen quickly but by that evening I was still sitting at 4cm with no progress. The doctor decided to give my body (and the babies) a rest and not to push the process too much so he decided to stop the Pitocin. He didn’t want to stress the babies out and I hadn’t eaten in 24 hours so he knew I could use the fuel as well. He mentioned we didn’t need mama or the babies hangry for this process (lol) so he let me order some food and have a break with the hubs. It was nice for Jason and I to have a break and just hung out (I wasn’t going anywhere with that epidural in place!). That evening my doctor decided to go ahead and start the cervidil so we did just that. By Sunday morning not much had changed (STILL). I started to feel so defeated! These babies did not want to budge! We started the Pitocin again and by 1pm there was still no change. My doctor told me he thought it was time to break my water and he did just that at about 2pm. Once my water was broke he said he would check back in an hour. Right as that hour mark hit my nurse said she’d check me before giving him a call. Much to MY surprise I was 6cm! We all were so thrilled! Well that didn’t last long because before the nurse could even take her gloves off I told her I had a sensation to push so she put new gloves on and checked again…within minutes I was fully dilated and ready to go!

Everything from there happened SO FAST. They wheeled me off the to the OR (where I had to deliver in case the need for a c-section arose) and it was officially go-time! Once they got me on the metal, totally not comfortable, OR table the doctor was right behind them. He told me I could push on the next contraction and within a couple pushes Beau made his debut weighing 7lbs2oz at 3:38pm!

After Beau came out one of the nurses pressed on my belly to keep Bradley from flipping and they handed me Beau to hold. I remember thinking how in love I was with him and how cute he was but also that I still needed to push the next baby out so how was I supposed to do that holding the first baby. I guess that whole twin mom multitasking thing starts immediately (lol). But once it was time to push the nurses took Beau over to the warmer and I got working on getting his brother out.

This part is kind of a blur but essentially Bradley’s heart rate started to dip so they gave me oxygen to help him. He wasn’t coming down like he was supposed to so the doctor told me he needed to use the vacuum to help bring him down and of course he had to advise me of the warnings. If there is anybody I trust most in the world when it comes to delivering babies it’s my OB so I knew it had to be done. The nurse whispered in my ear that I needed to make my next push the best one yet and we needed to get this baby out. That was all I needed to hear and on the next push I gave it my all. Within minutes Bradley was born at 3:57pm, weighing 7lbs4oz! I was beyond relieved and hearing him cry was the best thing ever!

The Nicu nurse came to check on Bradley due to his delivery but all checked out perfectly! Healthy as can be!

What was even more shocking to me was his hair! The nurses all gushed over Beau’s dark brown hair but since that’s how both my girls came out I was totally expecting them to look that way, what I was NOT expecting was to ever have a blonde baby like Bradley came out! The whole experience was magical. I still can’t believe I did it and I have so much respect for the whole team of nurses/my OB that helped my dream come true! Not to mention my amazing husband who was my biggest support every step of the way! I am so blessed to have these little guys in our life and I can’t wait to keep sharing our journey with you all! The love and support we have received from all of you has been so uplifting, so thank you!! I hope you enjoyed hearing my birth story! Get ready for lots of twin baby spam over on Instagram! Follow along at @ohhappyplay if you aren’t already! Thank you!

How To Make A Montessori Floor Bed

Organize Your Child’s Clothes With This DIY Wardrobe Station 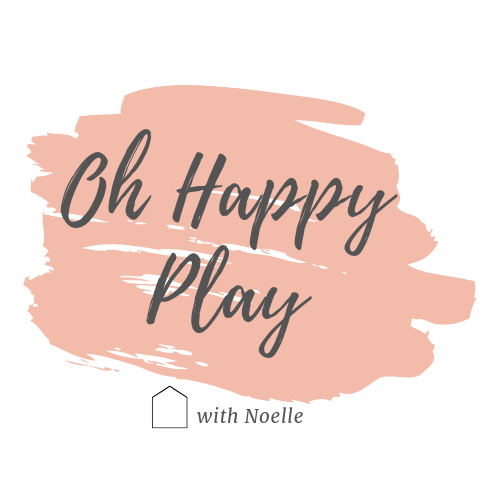 Hello! Noelle here! I am the owner + creator of this blog. I am the wife to an amazing man and mother to 4 children under 5! Two incredible little girls who are 16 months apart and TWIN baby boys! They all keep me very busy to say the least but I have learned to embrace the chaos! They say children don’t allow you to be lazy and I couldn’t agree more! I love my family, decorating, being a total mamarazzi, shopping small, and writing. Here you will find everyday KIDspiration from kids play spaces to room décor, mom life and more. For more about this blog and me hit the “about me section” and keep reading! Welcome and I hope you enjoy what you see!